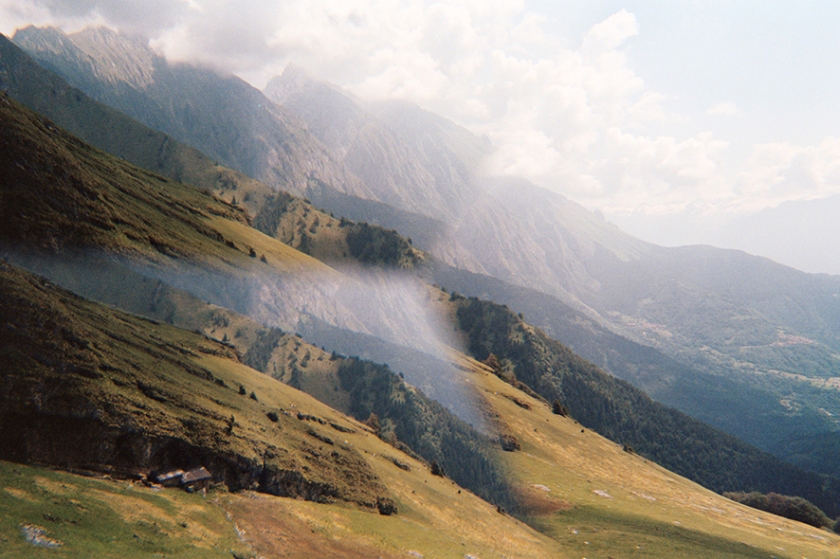 For many years, I had a recurring dream: I’m walking in the mountains with my grandfather. The sky is cloudy, it is hot, it must be summer. The place is familiar, something tells me that I know the trails well. Suddenly in front of me opens a canyon, or what resembles me as the limit of the mountain. Sometimes, in the dream, I let myself falling ahead. Other times I fall on my back while greeting my hand to my grandfather. He looks at me and smiles. Always, in both cases, I wake up on the impact with the ground: I never been afraid to do it again. On the contrary. Sometimes I hoped to start dreaming again, to walk over in search of edelweiss or marmots. It lasted for years: I fell asleep wondering if the dream would come to visit. I hoped to understand the reason of that magical presence, of that unexplainable unconscious. One day the dream disappeared as my grandfather did. That mountain is the Concarena, close to Iseo Lake in Italy. My work is a storyboard of the dream I had: photographs, drawings, watercolors, writing, walks. Images are analogic, and I use a particular lens to recreate an oniric landscape.

“The artwork Rêverie (‘Nhomiàh – from dialect: to dream) is linked to a series of projects on the theme of the places’ memory. This practice begins with the individual and family experience of the artist and finally reaches the community. The artist activates cartographic and imaginative researches, and she reconstructs the places where she has lived, linking them to a geographical theme, intended emotionally and sensitively. This allows her to analyze the territory through a series of particular features, such as feelings, memories, fantasy, imagination, melancholy, poetry, desire. Moreover, she includes in this specific artwork the dreamlike aspect of rêverie.

This French word cannot be directly translated into English. It could be intended with expressions as daydream, fantasy, dream, illusory imagination. The rêverie is a state of the spirit that abandons itself to memories and images. Bachelard intends it as the situation in which the ego lets its soul wander and enjoys freedom similar to that of the dream (rêve), even if rêverie appears, instead, like a phenomenon of wakefulness (ref. G. Bachelard, La poétique de la rêverie).

The set of her series appears as a large book divided into thematic chapters, representing by the different artworks. Her practice is always crossed by the common thread of archiving, which can transmit the fragmentation of the investigated places. After all, the archive itself is full of fragments: each one can create stories as different as the endless combining possibilities.

The artwork Rêverie focuses on a recurring dream of the artist, which is now slowly disappearing in her own memory. She reconstructs it by combining the recollection of her childhood spent in Valle Camonica with the uncertain and real repetition of the dream. Referring to the theme of fragmentation, and archive, the project is composed of a series of interventions-souvenirs. They can be read like single works, as well as they are signs of her global experience only in their entirety.

The photographs-postcards acquire a new character in their setting into a postcard holder, which becomes a sort of sculpture of everyday life. It contains the fragile and alienating explorations of the territory, in which photography is no longer intended as a documentary element, but it becomes a narrative medium like the words.

There is also a sculpture made with a piòda (from dialect: a thin stone used for the construction of roofs), in which the artist inserts one of the lenses she used for her photographs. Therefore, everyone can create their own vision of the mountain landscape that can be glimpsed outside the Casa-Museo della Gente di Lozio, reading it in a fragmentary way. Said object composes a sort of archaeology for the future: the artist inserts this new tool in a museum linked to the past, camouflaging it and activating the imagination, as well as it happens in the rêverie.

The artist also created a new bòta(from dialect: story), inspired by her dream. And written thanks to the collaboration of the community. Some phrases from this narration have been written under the balconies of the hamlet of Villa. It is an intervention that allows looking at the village, as admiring the high peaks that dominate it. They are a tangible trace of this dream but destined to vanish.

This translation is also an “exotic” element that the artist takes away, but at the same time, she gives it to the community as a new memory for the future. It is a legacy as a souvenir of its presence-absence. 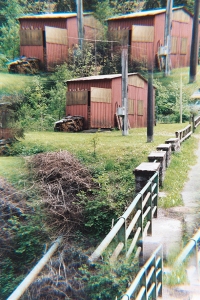 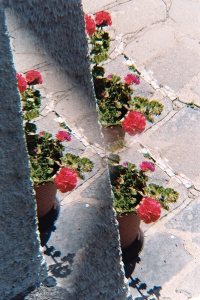 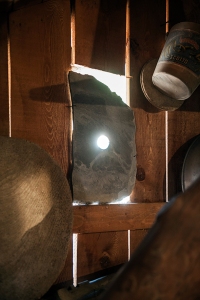 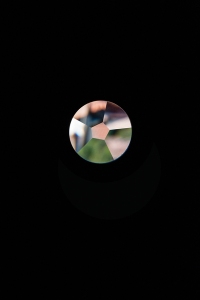