Understanding the ecosphere and the complex relationships that take place in it requires to be placed in other non-human points of view. As Timothy Morton argues in Dark Ecology (2017), only being aware of the existence of other temporalities, other spatial scales, and other protagonists, we can approach the ecognosis, or ecological awareness.

From this premise emerges the Plantocene, a story about the Anthropocene conflicts explained from another point of view, in a more extensive ecosystemic conception. This story is based on an invented, but yet feasible, geological era. Understanding it requires getting out of ourselves and our leading role in the conception of the world.

The name of Plantocene arises in opposition to the Anthropocene (recently differentiated geological epoch whose protagonist is the human being and its impacts on the planet). Considering the effects of photosynthesis in the composition of the planet, why do we not consider our planet from a Plantocene perspective, getting away from our traditional Anthropocenic view?

At a formal level, the Plantocene begins as an artistic research about the confrontation between the plant kingdom and human society, which questions the hegemony of our species. The exercise of placing the point of view beyond humanity has led me to progressively open the artistic processes to the participation of other living beings. This change in the proceedings implies my adaptation to other rhythms, scales, and processes. My role becomes that of an initiator of organic processes that occur in a non-anthropic timescale, and in which uncontrolled agents intervene, generating some kind of post- or para-human mutant landscapes.

Is in this para-human conception of the world where the Plantocene is aligned with the philosophical theories of speculative realism (Brassier, Hamilton Grant, Meillassoux and Harman) about the existence of reality beyond to what is accessible to humans. 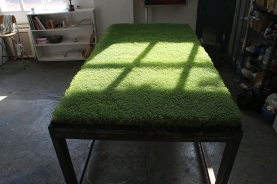